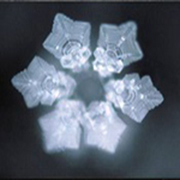 Cyma is the Greek work for Wave and the word cymatics was coined by Hans Jenny to refer to the wave forms made by sound vibrations.  These wave forms are the underlying structure in all matter.

‘Sound has the ability to rearrange molecular structure. When you are born every cell multiplies. Then at Puberty, the frequency patterns of the cells change and instead of multiplying, cell replaces cell. As we age, cells still replace each other, but the tempo slows down. Within a few years of time, we will be able to prevent this slowing down of cell replacement and all this can be done with sound. If we take a frequency sample of your cells, they will regenerate.’ Sir Dr. Peter Guy Manners 1990

Edgar Cayce predicted that Sound would be the medicine of the future.

The Cyma Method is an evolutionary step  in Sound Therapy.   Everything vibrates and has its own frequency pattern which also applies to the human body.  Sir Peter Guy Manners researched and developed Cymatics therapy using sound wave patterns which were aligned to the vibratory rate of different anatomical and physiological aspects of people. he also cataloged the patterns of multiple medical conditions as well as psychological states and more. Based on his work, the Cyma Method took the sounds and integrated them with a method of detecting the precise frequencies for the correction of any misalignment in the body/mind and emotions of people. Characteristic of Cymatics frequencies is that they can be applied safely and directly to the body and use a process of ‘entrainment’ to help restore the original cell structure and form. This principle has been extended by Dr. G C Peyton who has refined the assessment process into a series of Cyma Protocols wherein anyone can learn how to connect with the body’s wisdom and find out what they need to energize and restore stressed organs, glands, systems or functions in their world. We call this Energy diagnosis and it is personal to the individual and their uniqueness. So we are able to construct precise and personalized well being programmes to accelerate healing and reduce the potential for negative side effects often found in traditional health care programmes.

Sir Peter Guy Manners MD Osteopath spent over fifty years researching how the sound frequencies within  the human body. He delivered thousands of treatments with no side effects and demonstrated that less invasive and  more rapid healing can be achieved. Cymatics therapy – using the sound of your cells to restore structure and form when the body is breaking down. –

Cymatics is the study of the structure of sound vibrations and reflects the wave patterns inherent in all living things. Over a period of more than 50 years, Sir Peter Guy Manners studied the medical applications of sound and identified over 600 different resonant sounds reflecting all the body’s organs, glands, systems and functions including psycho –emotional wave patterns and developed a healing modality which could be applied straight to the body to restructure damaged cells. In so doing he tapped into the laws of Resonance and Entrainment– triggering the body’s memory to maintain its innate structure and form.Modern day Cymatics is still evolving, but   after literally thousands of treatment, results speak for themselves. In most cases healing is accelerated and side effects are unknown.

The Cyma Method uses Cymatics frequencies as selected by the client’s own Energy System. This enables a very precise and unique selection of frequencies to be applied  and applied in a way that gets to the cause of the problems.

Using the Lecher Antenna as an energy diagnostic tool the practitioner measures the subtle energy fields around you and in your environment. The reading changes when exposed to different frequencies and when your energy is exposed to missing frequencies they are selected from application.

By combining a precise set of selected frequencies in the form of sound waves a specific program is created for direct application to the body.

In this way we are combining two of the most powerful techniques to help restore your vital energy and the optimal quality of all your body’s cells, organs, glands and systems.

“Unless you take the person’s unique energy patterns into account optimal health and well being is going to be limited. This is why much modern healing whether it is through traditional medicine or more recent energy developments, Psychology and Belief change work like NLP and other modalities fall short in providing long term solutions and we have an increase in degenerative problems that just won’t seem to go away“

By continuing to use the site, you agree to the use of cookies. more information